Many paper size standards conventions have existed at different times and in different countries. Today, the A and B series of ISO 216, which includes the commonly used A4 size, are the international standard used by almost every country. However, in many countries in the Americas as well as in the Philippines, the North American series of paper sizes such as ‘Letter’ and ‘Legal’ is more prevalent A4, B5, A5—these are some of the most commonly used paper sizes in the world.

Let’s explore how international paper sizes work, then take a look at how different sizes compare to Letter size and what paper sizes work best for different applications. The A Series is more commonly used than the B Series, so let’s begin with it.

The A Series of paper size was originally introduced in Germany during the 1920s and quickly spread throughout Europe. By the 1970s it became widely used throughout the world and was codified by the International Organization for Standardization (ISO)  The A Series starts with the largest size, A0, which is 84.1 cm × 118.9 cm, or about 33.1″ × 46.8″. 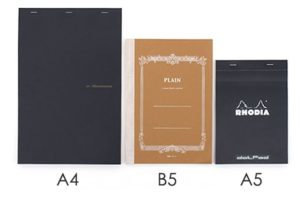 A measure of the extent to which a paper will resist a change in size as the result of a change in moisture content or the application of a compressing force, as during printing. The cellulose fibers comprising a sheet or web of paper have an affinity for water, which means that they readily absorb water from the atmosphere (or lose water to the atmosphere, depending on the relative humidity and the equilibrium moisture content of the paper). When paper fibers absorb water, they expand primarily in width, but only slightly in length. (Similarly, when a paper loses moisture to the atmosphere, the fibers will shrink primarily in width, but only slightly in length.)